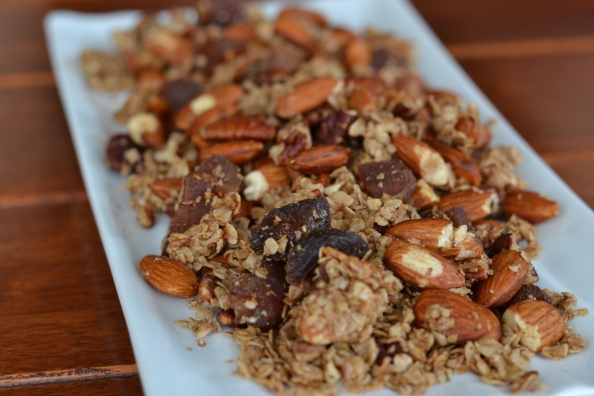 crunchy, chewy, filling and good for you

We were getting in a rut of eating toast and eggs for breakfast. Don’t get me wrong I love toast and eggs (especially because we get local fresh eggs from a dedicated amazing 12 year old egg farmer!). To change things up a bit, I recently purchased some granola from Farm Boy – a small little package on sale for $4.99.  $4.99 is better than $5.99 but that is still really quite expensive when you think about what it in the store-bought stuff…a few cranberries, tiny tiny slivers of almonds (maybe 2 tbsp!) and a whole lot of oats and brown rice syrup (the first two ingredients listed on the back of the package).

I actually really enjoy making my own granola but just haven’t done so in awhile. You get to put whatever you feel like in it and you can control the sweetness.  This time I used what I had in the pantry and I loved the combo – apricots and almonds (and I had to use up about 10 pecans so if you’re eyeing my pictures carefully that’s the other nut you see!). The apricots are super dark because I bought the unsulfured kind. They are actually really soft, sweet and really delicious.

Homemade granola is a great snack on its own, over yogurt, or can act as cereal with any kind of milk (2%, almond, soy, etc).  You can play around with the ratios a bit but you need the fat (I used coconut oil but you could use melted butter) and you need some liquid sweetness (like honey or maple syrup) so that your granola forms some clusters.  I like loading mine with mostly nuts and fruit, unlike the packaged stuff which is mostly oats. It’s definitely a better bang for your buck, and super easy and quick to make. It stores really well for at least 2 weeks in an airtight container (and even longer if you have it in the fridge).  It’s also a much more guilt-less snack when you’re craving something to munch on later in the evening once the kiddos are in bed!

store in an airtight container