You know it’s summer in Ontario when you can get fresh local corn and it’s juicy, crisp and sweet right off the cob! My 3 year old loves eating it that way – sometimes when I break it in half she gets mad…”I want to eat the whole thing mom!” Unfortunately I have a husband who won’t eat it off the cob…apparently it’s too much work and he doesn’t like getting it stuck in his teeth (fair enough I guess…but there is such a thing as floss!). Anyways! If you are finding yourself in need to separate fresh corn off the cob before serving or cooking, try this trick! I think I saw it on food network a few years back and it dawned on me today to use it to avoid corn kernels flying all over my countertops:)

Place a small bowl upside down inside a large bowl. Stand corn on little bowl and carefully start at mid-cob and slice off rows of kernels, turning until you get all the kernels from one half of the corn. Turn over and do the same thing on the other end to get the full cob.

fresh off the cob

I did leave two cobs whole today so that pie pie could eat it the way she likes. 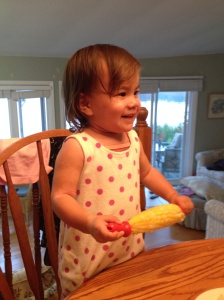 One thought on “catch your corn”